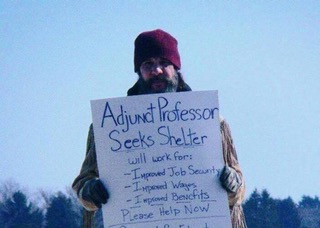 At the heart of the progressive movement is the firm belief that, if given power and a degree of control over others, progressives would never replicate the kinds of social and economic inequalities exalted in by the Right. A large-scale test of that claim has been ongoing in our universities for the last twenty years. The results are an illuminating account of the intransigence of inequality and a disturbing demonstration of what actually happens when you give a small group of highly educated, self-identified progressives power over the lives and well-being of others.

Within academia, one of the supposedly most liberal groups in America – tenured university professors – maintain and enforce a strict hierarchy over part-time, contingent faculty known as adjuncts. This is a form of inequality which has become so normalized in universities that those who perpetuate it truly believe they are the kind of people who would never do such a thing. The workings of this academic hierarchy reveal progressivism’s fundamental misunderstanding of how inequalities are continuously constructed, justified and enforced – even by those who are unwaveringly attached to their own progressives convictions.

For the last few decades, university administrations have been replacing the majority of tenured faculty positions with lowly paid adjuncts. As a result, an economic division emerged within faculties between a small number of well-paid tenured professors and a larger class of poorly-paid, contingent, part-time adjuncts who are not eligible for tenure, have little to no job security, and no opportunity for advancement.

Tenured faculty didn’t create the original division; they were handed an existing financial inequality which they then had the ability to either ameliorate or exacerbate within the boundaries of departmental discretion. What has emerged is a highly stratified, highly rationalized, hierarchy within departments in which adjuncts are viewed as naturally deserving less than tenured faculty and are given virtually no input or consideration in the decisions which directly affect their lives. The continuing rationalization of this hierarchy of individual value and worth undercuts a basic progressive belief that the tendencies to construct and maintain inequalities are mitigated by education, income and liberal self-identification.

‘[The] success [of power] is proportional to its ability to hide its own mechanisms.’
Michel Foucault

The rationalization of the faculty class structure is indicative of the cultures of inequality which persist at all social and economic levels. The more a constructed power relation is allowed to morph into normalcy the more insidious the inequalities it generates. The philosopher Michel Foucault claimed that “the real political task in a society such as ours is to criticize the workings of institutions which appear to be both neutral and independent; to criticize and attack them in such a manner that the political violence which has always exercised itself obscurely through them will be unmasked, so that one can fight against them.” Without a complete exposure and fracturing of cultures of inequality – wherever they occur – a progressive political movement aiming for large-scale social change runs the risk of ultimately reinforcing inequalities which have become naturalized and rendered invisible.

During the 2016 presidential campaign Senator Bernie Sanders spoke passionately about the role of government in providing free college tuition for all. However, the Senator never denounced the impoverishment and marginalization of adjuncts even though challenging those kinds of constructed social and economic hierarchies formed the basis of much of his campaign. The effect would have been a highly progressive program which validated and reinforced the very kinds of inequalities it was designed to undermine.

An effective progressive politics must aim to expose and deconstruct all cultures of inequality, whatever the economic class or political identification of those who perpetuate them. To allow the rationalization of inequality anywhere is to validate it everywhere.