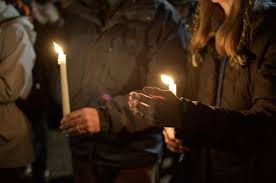 When speaking with my students about “identity,” I often refer to myself as “Jew-ish.” The term is always accompanied by a slight rocking motion of my hand – a small gesture emphasizing an ambiguous attachment to my own self-description.

For those of us who, in our daily lives, are far more “ish” than “Jew,” the kind of religious connection we feel with the victims of the recent synagogue shooting in Pittsburgh can be complicated. Are we to feel a wave of disgust, and fear, beyond that of all caring human beings? Are we suddenly supposed to feel more Jew than ish?

“Jewish” is a particularly complex identity as the term seemingly represents both a religion and an ethnicity. If hearing about Jews being shot doesn’t  transform the ish into devout practitioners, does it still momentarily alter our ethnic identity and our attachment to it? Are we to believe that a designation we never perform, and rarely even conceive of as an identity (let alone our own), has always been who we truly are?

The recent shooting compels the ish to locate ourselves on the terrain of a Jewish identity which is now under attack in America while simultaneously fueling atrocities abroad. The attack in Pittsburgh touches us in a personal way, even as the ongoing attempts by Israel to destroy the Palestinian people further a detachment from what appears to be the inevitable outcome of merging religion and ethnicity into a singular Jewish identity.

The French Marxist theorist Louis Althusser wrote about what he called interpolation – a process by which ideologies “hail” or “call out” to individuals, offering them a particular identity. Interpolation is not necessarily voluntary. It is a hailing which can often wrench us away from our already conceived and functioning sense of who we are.

Interpolation can be extended to a myriad of daily occurrences, such as the first time someone in their twenties refers to you as “sir” or “ma’am.”  Suddenly feeling old? Congratulations, you’ve been interpolated.

The attack in Pittsburgh is a form of hailing. But who or what is it calling out to? Are the Jew-ish free to turn away from this momentary re-shaping of our identity, or is there something that persists within us which inevitably responds?

The ish may need to think of our identities not as expressions of a stable essence or history, but as highly contingent and contextual. The feminist Judith Butler once told friends she was “off to Yale to be a lesbian.” Butler didn’t mean she wasn’t always a lesbian in her life, but that, at the particular conference she was attending, the complexity of her being would be reduced to a singular aspect. Her over-riding momentary identity as “a lesbian” would be a temporal, contextual effect.

The ishness of being a Jew complicates even Butler’s nuanced understanding of the contextually of identity. At certain moments in history the ish are called to an identity which, though unobserved and unacknowledged, seemingly lingers in our being. Jewish is not our identity, but we possess the raw material for its temporary construction.

As the attack recedes into history we will again be more ish than Jew. Until the tragic cycle repeats. The descriptions we offer of ourselves are not measures of who we are but, rather, where we are positioned at a particular moment and time in history.