The claim that a group’s “rights” are being violated is a long-standing form of identity politics which aims to protect the marginalized from unwanted incursions of power. Though rights often seem the only tool available to combat oppression, the identities they generate are constructs of exclusion and constraint.

The application of rights requires that there be an existing group in need of protections. This group is politically defined by its list of “shared” grievances. Determining this list of grievances  – the rights which will delineate the group’s oppression –  inevitably engenders a central authority.

During the 2016 campaign, Bernie Sanders referred to Planned Parenthood and the Human Rights Campaign (HRC) as being “ part of the establishment.” The comments generated a significant debate within the Democratic Party as to what substantively separates establishment from margin. But the division is not a matter of evaluating different policy goals; “establishment” refers to which organization’s list of grievances is shaping the marginalized identity and its “rights.”

The recent politics of the HRC exemplifies the highly constraining effects when “rights” are joined with assimilationist goals.  Historically, gay politics attempted to open spaces for alternate forms of social and personal relations. Problematizing the naturalness of sexual norms was seen as an important contribution of non-dominant sexualities.  In contrast, the HRC offered only the right to assimilate into those norms. 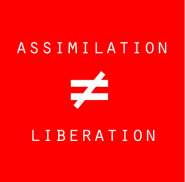 The power exhibited by the HRC was not merely the triumph of gay marriage and military service. Their power rested in their ability to utilize these goals to shape a new “gay” identity and institute different standards of “appropriate” behavior. All those who had argued for different forms of living, were now re-cast as foot-soldiers on the inevitable march to military, marriage, and monogamy.

Rights-based politics protects only those who are in agreement with the specific types of rights being sought. Those who seek to destabilize institutional and sexual norms are deprived of a political or social space, or even a recognized existence, within the new “gay politics.” The sexuality of the 1970s is now the Upside Down of gay identity. A shadowy repudiated remnant; a lurking danger to the new well-scrubbed identity of weddings and baby strollers.

There have been a number of theorists who have criticized the exclusionary aspects of “rights” politics and have argued for the dissolution of all identity categories.  This dissolution is far different than the HRC path in which the marginalized group is dissolved into the now-strengthened dominant identity.

In her book Gender Trouble, Judith Butler wrote, of feminist politics, “feminist critique ought…to understand how the category of ‘women,’ the subject of feminism, is produced and restrained by the very structures of power through which emancipation is sought.”  Butler claimed that the contemporary feminist category of “women” is constructed, restrictive, and exclusionary.  She argued, instead, for deconstructing – not protecting and multiplying – the categories that define and separate people.

Butler claimed that “if politics [was] no longer understood as a set of practices derived from the alleged interests that belong to a set of ready-made subjects, a new configuration of politics would surely emerge from the ruins of the old.” Butler offered no details of a sexual utopia; she gave no political roadmap to the new configuration.

This ambiguity is off-putting to many of those currently engaged in gay politics who prefer the well-trodden path of “rights.”  The result has been a progressivism which continuously chases its own tail; re-fighting the same rights-based identity battles every decade.

The HRC focused on shaping a rights-protected sexual identity that was acceptable within dominant institutions.  But successive generations of young people are performing Butler; appearing less and less tied to any identity categories. The generational views on homosexuality have shifted from claims of toleration based on a fixed identity, to the disappearance of sexuality as a marker of identity. “Homosexuality” and “heterosexuality” become indistinguishable within the malleable flow of desires.

The same attitudinal shifts can be seen towards gender.  Younger generations are far more open to an elasticity which may render the current male/female binaries as archaic relics. Race has become so multi-faceted that any attempt by the U.S. Census to appear more inclusive through additional identity categories is attacked as exclusive and restrictive.

The emerging “trans” movement has the potential to further deconstruct identity categories. Or it might result in a series of internecine battles which will define the new “trans identity” and its rights-based protections.

Progressive politics should not be supporting constructions of identity by any centralized power, nor should it be participating in the imposition of norms of behavior. Progressivism should seek ways to further the dissolution of all identities and to end the politics of assimilation.

The arguments for “rights” are more than three hundred years old, yet activists remain solely reliant on them. Central organizations, whose existence and power is dependent on rights-based politics, will continue to ignore the politics of non-identity espoused by theorists such as Butler.  But if the cultural dissolution of identity categories continues, rights-based politics will slowly sink into the shifting sands of irrelevance.